10 Surprising Mid-Run Snacks (And Drinks) To Boost Your Marathon

Everything you need to know about mid-run fuelling and hydrating... 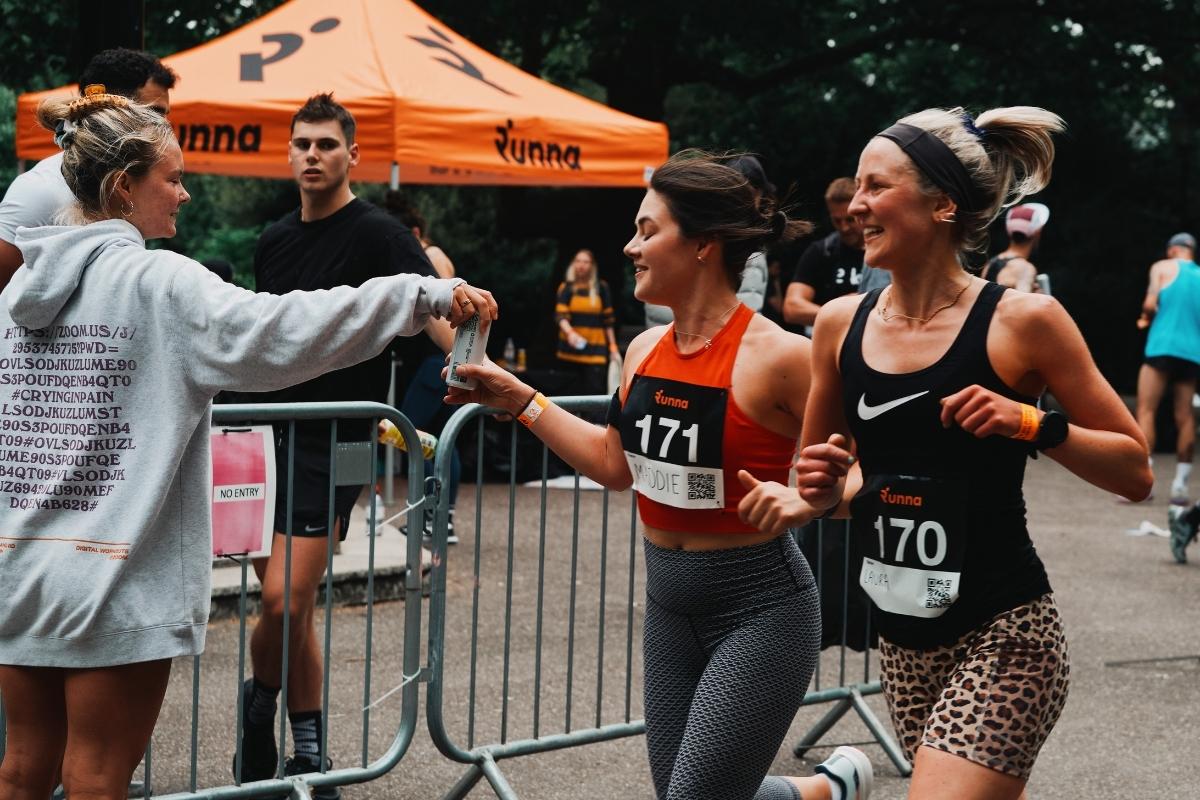 Lacing up at the start line of an epic marathon course is a feeling like no other. Shaking off the nerves and anxieties, soaking up the buzz that bursts from the crowd, double checking your laces are the perfect tension and setting your watch to timer mode as you get ready for the starters orders. But soon after you set off, another feeling usually enters the fold: the rumble in your belly.

But mid-marathon hunger is a different beast. It’s a feeling that takes over as your energy levels fall off a cliff, leaving you with weak knees, nausea and blurry vision as your mind starts thinking exclusively about food, despite not knowing whether you’ll actually be able to keep it down. That is what makes the mid-marathon such a challenge to get right. You need something that’s packed full of energy yet easy to digest. The answer: fast-working carbs.

The reason for this is simple: these carbs are packed full of sugars that will enter your bloodstream quicker than Paul Radcliffe can reach the finish line, giving your fatigued muscles an extra boost of fuel right when they need it. And the best part: because the snacks we have picked out are so low in fibre, you’ll also reduce the risk of muscle cramps.

So with all that said and done, here are the most surprising mid-run snacks to ingest the next time you pound the pavement for longer than an hour, at a rate of up to 60 grams every 60 minutes. Let’s do it:

When it comes to a mid-run munch, you want something that will pack a punch. Something that’s going to give you a steady release of energy as you take on the next set of miles. That’s where these mighty morsels really come into their own:

Okay, this one probably isn’t surprising per se because almost-everyone knows that bananas are epic. But what is surprising is just how epic they are. Get a load of this: just one average-sized banana contains an average of 27 grams of fast-digesting carbs, making this curved, yellow fruit just as effective as a carbohydrate drink when it comes to your performance, blood sugars and oxidative stress.

And here’s another surprising fact: the browner they are, the simpler the sugars. Translation: the quicker they will be absorbed into your bloodstream, which could be exactly what you’re after when facing the midway wall of a marathon.

In the same way you’d probably never snack on raisins or dates in normal day-to-day life, they are one of those things every runner should snack on during a long run. First up, raisins, which are super-high in calories yet don’t actually feel like you’re eating anything, making them ace for any runner that has lost their appetite as well as their energy.

As for dates, these little energy-boosters are packed-full of natural sugars and potassium, so not only will you get a sweet snack to chew on, but you’ll feel an incredible burst of energy as you continue on your hunt for the faraway finish line.

Once again, not that surprising until you delve into the secret behind this staple among marathon runners. You see, the way energy gels work is by replenishing your depleted carbohydrate stores while running. This is all thanks to each hit boasting an incredible amount of energy and electrolytes in the form of carbs, sodium, potassium and magnesium.

In layman’s terms, most leading isotonic gels are able to quickly deliver carbohydrates to you during your long run, while also minimising the need for water so there’s no risk of crossing the finish line more bloated than a scared puffer fish. Get ready for the performance of a lifetime.

Jelly Beans. Gummy Bears. Percy Pigs. Jelly Babies. Wine Gums. Haribo Starmix. Haribo Supermix. Haribo Tangfastics. OK, you get the point: jelly-based sweets are a great energy-booster for those running a marathon thanks to the fact they are packed full of sugar, yet have almost no fats or fibres to slow down the rate at which your body absorbs them.

The trick is understanding how to fuel your body with jelly sweets, a science that starts with understanding that most marathon runners will struggle to consume any more than 60g of carbs per hour. To put that into perspective:

To contradict everything your mum told you when growing up, white bread is best for marathon runners thanks to those sweet, sweet carbs. Now slather on some honey and what you have is a delicious way to send a lot of simple sugars directly to your calves, quads, hamstrings and every other muscle that is aching and throbbing and aching some more.

The only hurdle to overcome is portability because, let’s be honest, carrying a honey sandwich in your bum bag isn’t exactly ideal. Nor is hiring a butler to run alongside you with a silver platter. Luckily, a simple switch from white bread to plain flour tortillas (and rolling them up into easy-to-bite snacks) will make this issue disappear.

We get it. When your belly starts to rumble at the 13-mile mark, the only thing that is going to work is a snack. But fluids have their own role to play, quickly sending nutrients and energy into your bloodstream – and for that purpose, these drinks are the best.

When you run 26.2 miles, there’s a pretty huge chance you’re going to sweat, and when you sweat, your body is actually sweating out some pretty important electrolytes, like sodium, calcium, potassium and magnesium. That’s what makes coconut water so good. Not only does it replace the four electrolytes I just mentioned, but it’s also packed full of good old phosphorus. In fact, just one standard-sized cup of coconut water contains around 10g of carbohydrates. That’s a punchy amount of energy.

Move over, Gatorade, there’s a new all-natural beverage in town: gherkin juice. Yup. As we mentioned above, long-runners tend to sweat out a lot of salt. When those salt levels drop off, dehydration tends to creep in. Cue: gherkin brine.

Sipping just 2 ounces of this stuff can give you a 200mg hit of sodium, quickly replenishing the body’s lost electrolytes, while scientific research also proves gherkin juice blocks the neurological signal that triggers muscle cramps. So if you’re running for more than two hours, try sipping on gherkin juice mid-run to keep hydrated, energised and cramp-free..

According to numerous studies, indulging in EGCG – a component found in green tea – while pounding the pavement will help to improve your endurance and increase VO2 max. That’s the good news. The bad news is: you’d have to sip on an awful lot of green tea to get the same results as taking EGCG capsules.

As for those looking to enjoy a cheeky little mid-run cocktail, mixing honey into your iced green tea will give your body a delicious kick of potassium, which is known to improve muscle function and reduce muscle soreness, making it a great mid-run tipple for long distances.

H20 is great. No one can deny that. But if you want to take your water game up a level, try adding some fruit slices, berries and herbs for an extra hit of nutrients and carbs. Mint, lime and cucumber. Strawberry, basil and lemon. Pineapple, orange and ginger. Whatever takes your fancy,  fruit-infused waters are easy to make, nutritious and refreshing, while actually improving the way in which your body takes on both the added sodium and water.

We all have a favoured sports drink. Gatorade, Powerade, Nuun, Nooma, OTE, the list of fluid replacers goes on and on. Sure, the best thing to drink is water if you’re running for less than an hour, but anything over and these sports drinks can drastically improve your recovery and performance. In fact, research suggest that runners who swig on sports drinks improved their time by almost 4 minutes over the course of a marathon when compared to drinking just water. Turns out they’re not just placebos after all.

Thanks for reading. For more running insights, inspirations, stories and techniques, follow us on Instagram and Strava -- or simply check out our personalised running plans at Runna. 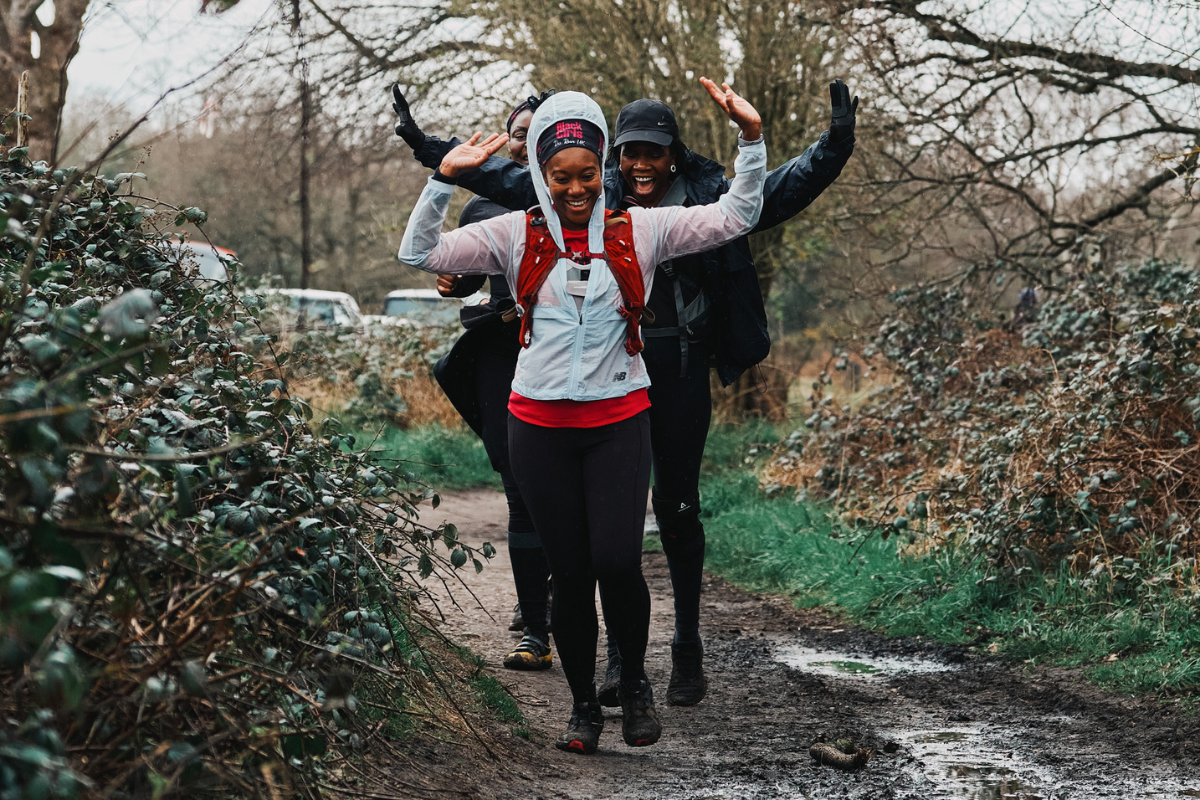 Here’s exactly how to boost your motivation when the temperature drops, according to our cold-weather runners. 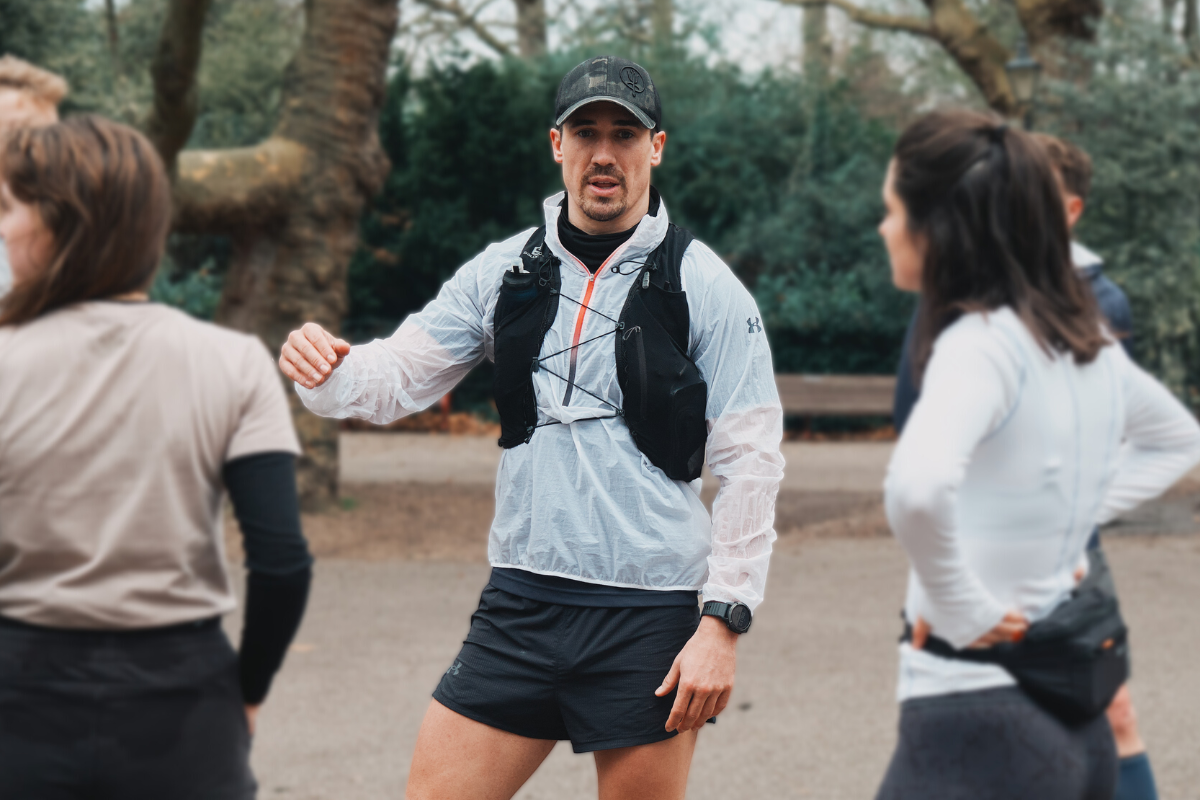 The Best Running Gear to Keep You Motivated All Christmas 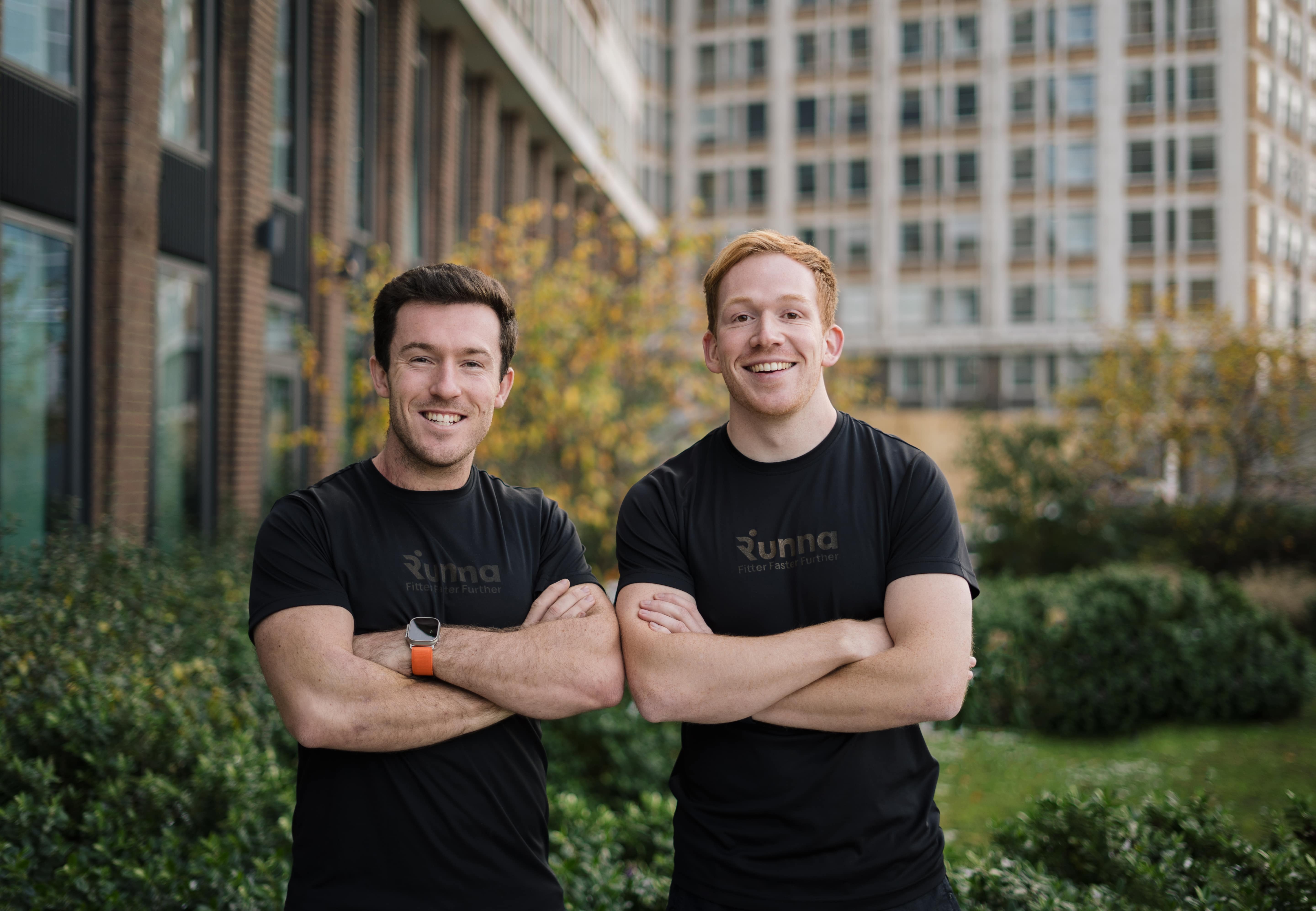 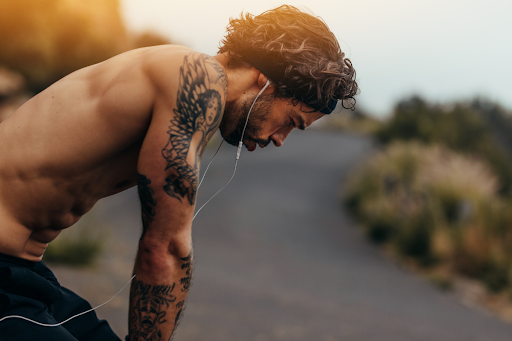 The 5 best headphones for Runners